The Railway Heritage of Britain

150 Years of Railway Architecture and Engineering

The Railway Heritage of Britain is the first comprehensive illustrated guide to the outstanding landmarks and little known treasures along the main and branch lines of the national network. There are entries on more than 500 historic railway structures, as well as over 750 illustrations. The book is fully indexed and cross-referenced, with an illustrated glossary and specially drawn maps.

150 Years of Railway Architecture and Engineering
Railways and railway stations have always been associated with romance, adventure and the pioneering spirit. They caught the Victorian imagination, and the proud and individual railway companies became some of the most prolific and inventive builders of the Industrial Revolution. The Railway Heritage of Britain covers an enormous variety of subjects: not only stations, bridges, tunnels and viaducts but hotels, engine sheds, warehouses, water towers and signal boxes, crossing keepers’ cottages and war memorials.

The railway network was built by well over a hundred different companies, each with its own distinctive style. All the main ones are introduced in the book, together with their locomotives and rolling stock, their platform signs, tickets and operating equipment. Biographical portraits of Isambard Kingdom Brunel, Robert Stephenson, Sir William Tite, the Cubitts and other leading architects and engineers complete this region-by-region history of British railway building as it can still be seen and appreciated today.

HOW TO USE THIS BOOK

Gordon Biddle is a past President of the Railway and Canal Historical Society and a leading authority on railway architecture in Britain. He is the author of Victorian Stations, The British Railway Station (with Jeoffry Spence), Railway Stations in the North West and Great Railway Stations of Britain: Their Architecture, Growth and Development as well as three volumes on canals and waterways.

O. S. Nock(1927-1994) was one of the most prolific railway writers in Britain. Formerly Chief Mechanical Engineer of the Westinghouse Brake and Signal Company, he was the author of more than 100 books on locomotives, engineers, railway companies, signalling and railway operation in Britain and overseas.

INTRODUCTION
No one who travels by rail can fail to notice that he is using an old form of land transport, the first in fact to offer an advance on horse power. The trains may be modern or relatively so, but neon signs, petrol stations and all the clutter and ribbon development associated with the ubiquitous motor car are comparatively absent along the railway lines. The countryside very often comes up to the tracks, the scene is more pastoral, still recognisably the world portrayed by the early railway artists such as J. C. Bourne, A. F. Tait and many others, in which sheep grazed beneath the viaducts and the carriage-borne gentry travelled out to admire the ornamental tunnel portals and the steam horses of the iron roads. 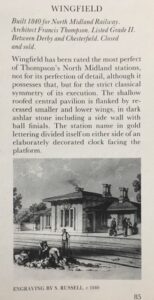 Even in the cities the railways usually approach the stations against a backdrop of old mills and warehouses, some still bearing enamel or wooden advertising signs, all mixed up with Victorian terraces displaying their backyards and too often awaiting the demolition contractor. Here we scent the Victorian underworld of Doré, Mayhew and Dickens.

Here is the entry for Wingfield in the North Midlands, picked as an example to demonstrate the layout used for each structure included in the book. For speed and ease of reference, all 500 entries start like this with a gazetteer in italics stating where known the date built, the company, the architect, listing grade, location and status.

Perth is a remarkable station in several respects, and is well named ‘the Gateway to the Highlands’; before the Grouping of 1923 it was here that enormous volumes of summer traffic were exchanged with the Highland Railway. In the summer of 1923, for instance, 25 major long-distance expresses containing sleeping cars, Pullmans and through coaches to and from a wide variety of destinations were re-marshalled at Perth each day for the south-bound direction.

For its design Tite clearly copied many features from his station at Carlisle, particularly the generally Tudor styling and the turret. The main footbridge (added later) is virtually a replica of the Carlisle footbridge.

The fine two-storey buildings have had several extensions over the years, and at one time housed three separate booking offices, for the Highland, the Caledonian and the North British. The old refreshment room still retains its Corinthian columns, deep panelled ceiling and marble fireplace, relics of more prosperous times.