An actress with one of the greatest artistic reputations in cinematic history, Katharine Hepburn retells favourite stories from her childhood, including The Musicians of Bremen and Beauty and the Beast. Recorded on cassette, her iconic voice has created a world of delight for children from two to eight, or ten times eight.

When Katharine Hepburn was a little girl she loved to hear her grandfather telling The Musicians of Bremen, and in her first acting part at the age of 12 she played the Beast in Beauty and the Beast. In this beautifully produced book/cassette pack she brings six traditional tales vividly to life: The Emperor’s New Clothes, Jack and the Beanstalk, The Nightingale (from China), The Musicians of Bremen, Beauty and the Beast and Tattercoats. She has firmly put her own stamp on the way the stories are told and her voice brings to today’s children that wonderful resonant personality which has delighted several generations of movie-goers. The book features illustrations by Alison Claire Darke, Brian Lee, Ginny Humphreys and Christopher Marlowe.

The Musicians of Bremen

Jack and the Beanstalk

Beauty and the Beast 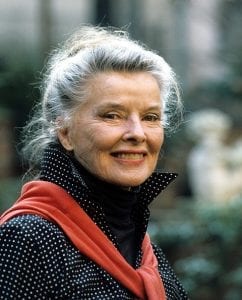 Born on 12th May 1907 in Hartford, Connecticut, Katharine Hepburn was the daughter of a doctor and a suffragette, by whom she was always encouraged to speak her mind. She attended Bryn Mawr College where, in 1928, she received a degree in History and Philosophy. It was here that she decided to become an actress, appearing in many of the college productions. With four wins, Hepburn still holds the record for the most Oscar for Best Female Actress, and is probably best known for her roles in The African Queen and Bringing Up Baby. She died in 2003, at the age of 96.

FOREWORD
These stories are called fairy tales. They are the secret tales of the world of our childhood, where anything is possible. The animals talk, there are large beanstalks, people can be changed into animals. Anything – just anything – can happen. And of course, don’t forget, virtue is its own reward. Help the weak. Do good. Punish the wicked. These are the messages that shine through stories.

‘Yes of course, Dad, we’re old enough to catch on to that idea.’

But Gosh! Well, that takes me back a while.

When I was a child I listened, enchanted, as Grandfather Hepburn, who was a minister, told his special versions of fairy stories. He retold the old stories, but added something of his experiences and personality. And this is the way with the best of story-telling. It is live, it keeps on growing.

THE EMPEROR’S NEW CLOTHES
A long time ago, there was an Emperor who was very rich, and he was very proud.

The Emperor, of course, was supposed to rule his Empire, but he left all the real work to his ministers and was totally absorbed with his own silhouette. He simply walked up and down before the mirror in his splendid clothes.

Let’s face it, the Emperor was very vain.

Now the Emperor was certainly the richest person in his country, and so naturally he could buy the most beautiful clothes.

They were made of silks and satins and velvets, and they were in lovely colours, too. The Emperor looked at himself in his big mirror, and he murmured, not only to himself but to those nearby, “I am indeed, no question about it, the most handsome man that ever lived.”>